Home | Outlook | Standing Up For A Better World
30shares 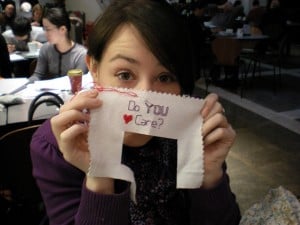 Shakespeare’s Hamlet is remembered for these memorable lines, “To be, or not to be: that is the question: Whether ’tis nobler in the mind to suffer the slings and arrows of outrageous fortune or to take arms against a sea of troubles and by opposing end them?”

When it comes to fighting against a sea of misfortune, is there some big picture social issues that you have decided to ignore because you feel weak and powerless?

Standing Up Against Big Banks

Were you affected by the financial crisis in 2007 when the big banks almost toppled the US economy?

When the Obama Administration asked the state attorneys general and the Feds to find out what the five largest mortgage service providers were doing to create the huge number of foreclosures, they initiated massive regulations and forced the “too big to fail, too big to jail” bankers to pay $25 billion in settlement fees.

Standing Up Against Big Pharma

Have you ever been negatively impacted by a prescribed medication with serious side-effects?

When the law firm Baron and Budd found out that Cipro, a popular antibiotic, could be responsible for a form of nerve damage called peripheral neuropathy, they began investigating to see it there were legitimate grounds for victims to file lawsuits.

Standing Up Against An Automotive Giant

Were you affected directly or indirectly by a faulty GM vehicle?

General Motors recalled 2.6 million cars in the first 3 months of last year. Faulty ignition switches that shut off when the car was driving due to weighted keys had been linked to 32 crashes, resulting in 13 deaths. The Saturn Ions and Chevrolet Cobalts had been on the road since 2004. The worst part of this case was that GM actually knew about the faulty mechanics at some point but did not take action because it would have been too expensive to recall cars.

“Bringing a wrongful death lawsuit against GM, Cooper obtained more than 32,000 pages of related lawsuits and other documents from the company, deposed about a dozen of its engineers and gathered assessments of the ignition issue from dealers. According to some of the depositions, reviewed by Bloomberg News, the defect was known to some dealers, engineers and managers since at least 2004.”

How Do These Big Stories Affect You

What do these efforts of a law firm and the governments have to do with you?

They are examples of massive efforts to right huge wrongs, some of which might have affected you personally. Without this effort, the drug firms and the bankers and billion dollar automaker would have continued to crank out profits regardless of who got hurt.

What Do You Want To Stand Up For?

Scaling this down, where in your life have you just decided to settle against social injustices and not taken arms against a siege of misfortune. Perhaps, it’s time for you to protest against GMO, chem trails, fracking, and fluoridation or some other social injustice in your own small way…because the more people who stay silent, the worse things will get.

7 Things You Can You Do

Here are at least seven things you can do:

A Lesson From History

Life is tough, but we must be tougher. The only reason the Spartans were able to defeat the mighty Athenian Empire was because Spartans learned how to overcome Athens mighty naval advantage and marched directly on Athens during the Peloponnesian War. The Athenians were far smarter, much more culturally advanced, and dominated the oceans – but the Spartans were tougher. Through the rigors of their cultural training, they had developed a collective iron-will.

Many things can go wrong in a democratic society even if the majority of people focus on doing the right things. When a social injustice is perpetrated by a gigantic corporation or some other formidably large and powerful group, it’s easy to fall into a state of learned helplessness, despair, and quiet desperation.

Yet, finding the good through the bad and standing up for what is right is part of living in a democratic society. While the default state of mind can be to give up or look the other way, the way to live the good life is by participating to either do good or fight against an obvious wrong. When you do decide to participate in a democracy, you will benefit hundreds, thousands, even millions of people. The only reason evil happens is because good people remain quiet.

Dream Big, Start Small
Next Post: Benefits of Couples Therapy In The Early Stages of Marriage »