Home | Personal Development | Toothpaste Is Natural, And You Can Thank Your Lucky Stars
34shares 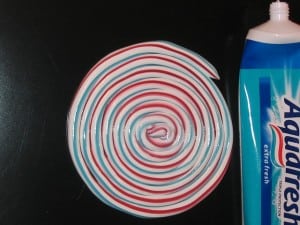 You use your natural toothpaste every day, but that doesn’t necessarily mean it’s ever-present in your thoughts. Sure, you may ponder what brand whitens best, is strongest at fighting cavities, or gives you the best bang for your buck – but have you ever actually sat down and thought about what’s going on inside that little tube? One of the primary components in toothpaste is something called fluorine, and you might be surprised to find out that it has quite the cosmic past. But first, a few words on fluorine.

Flourine In A Nutshell

Flourine is a chemical element commonly found in a number of everyday products from chewing gum to toothpaste. Its inclusion in dental care products began in the middle of the 20th century, when it was shown to improve dental hygiene, and has continued ever since. Despite its widespread popularity, however, its origins have long been a mystery. So much so, in fact, that until very recently, three different theories of its origins existed. But now, scientists have discovered something downright “out there” that may put to rest all three other theories once and for all.

Its Roots Are In The Stars

Modern-day astronomers have linked fluorine to long-dead stars that were once quite similar to the sun, but have long since burned out. According to the new evidence, these stars were heavier than the sun and reaching the end of their lives, and they eventually died, leaving behind material that led to the creation of the current solar system. That’s why fluorine is so frequently found in so many parts of the world, and why astronomers now say that what we use every day to clean our teeth is actually derived from long-dead celestial beings.

The Science Behind It

When a team of international astronomers decided to explore the formation of fluorine even further, they found that the element is created once a star is already well on its way to becoming what’s known as a red giant, or a star in a late phase of life. The element then travels to the outer edge of the star, which is then cast off, forming new matter, such as our modern-day solar system.

While you may not have given much thought to your toothpaste when you brushed those pearly whites this morning, you now know a little something more than you did when you got up. Before you hit the hay tonight, be sure to brush those teeth – and then take a long look up at the stars and think about how truly amazing science really is.