Home | Outlook | What Are You Running From?
64shares 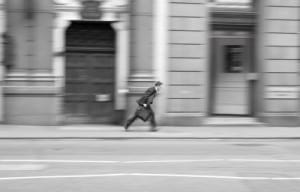 I’ve run from things a lot in my life and I’m not talking about the person that was “it” during a game of tag! Whether those things were jobs, relationships, whatever, I’ve run from it.

My first job out of college was with a financial services firm in the heart of Philadelphia. I lived an hour outside of the city. The roads to get into the city were always jammed with traffic, so I took public transit. The only issue was I had to drive 30 minutes to the train station and then ride the train for 50 minutes. My day worked out like this:

If I missed that 5:15 train home, I wasn’t getting home until 7:30. To many reading this (and even as I look back now), this doesn’t seem too outrageous. Sure the commute is a little much, but overall, it isn’t the end of the world. But to me, fresh-faced out of college, it was. My first day was a Monday. That Thursday, I went into work, quit, and was on the 9:05 train back home. I just couldn’t handle it. So I ran from it.

I could have looked into moving closer to the city (I was living with my parents at the time), but that thought never crossed my mind. All I could think about was how much I hated that job/commute. But how much could I have hated it when I didn’t even give it a chance?

What Are You Running From?

Maybe you just received a promotion at work or are taking on new responsibilities and you don’t’ think you can handle it. I ask you, what are you running from? Are you like me and are running from the long commute, or the scariness of actually growing up? Are you afraid of failing? Or is it something in your past that has resurfaced and you are simply using your new responsibilities as an excuse?

For all you know, you could be giving up something great. So before you quit or give up, take some time to look inside yourself and realize what are you running from. You may find that you are just trying to run from yourself, which unfortunately, you will never do. It will just be a cycle that constantly repeats itself over and over again throughout the rest of your life until you decide to actually do something about it.

As Confucius said, “Wherever you go, there you are.” No matter where you go or what you do, that issue will be waiting for you unless you accept it and deal with it. So, what are you running from?